A Special Thank You to Our Doctors 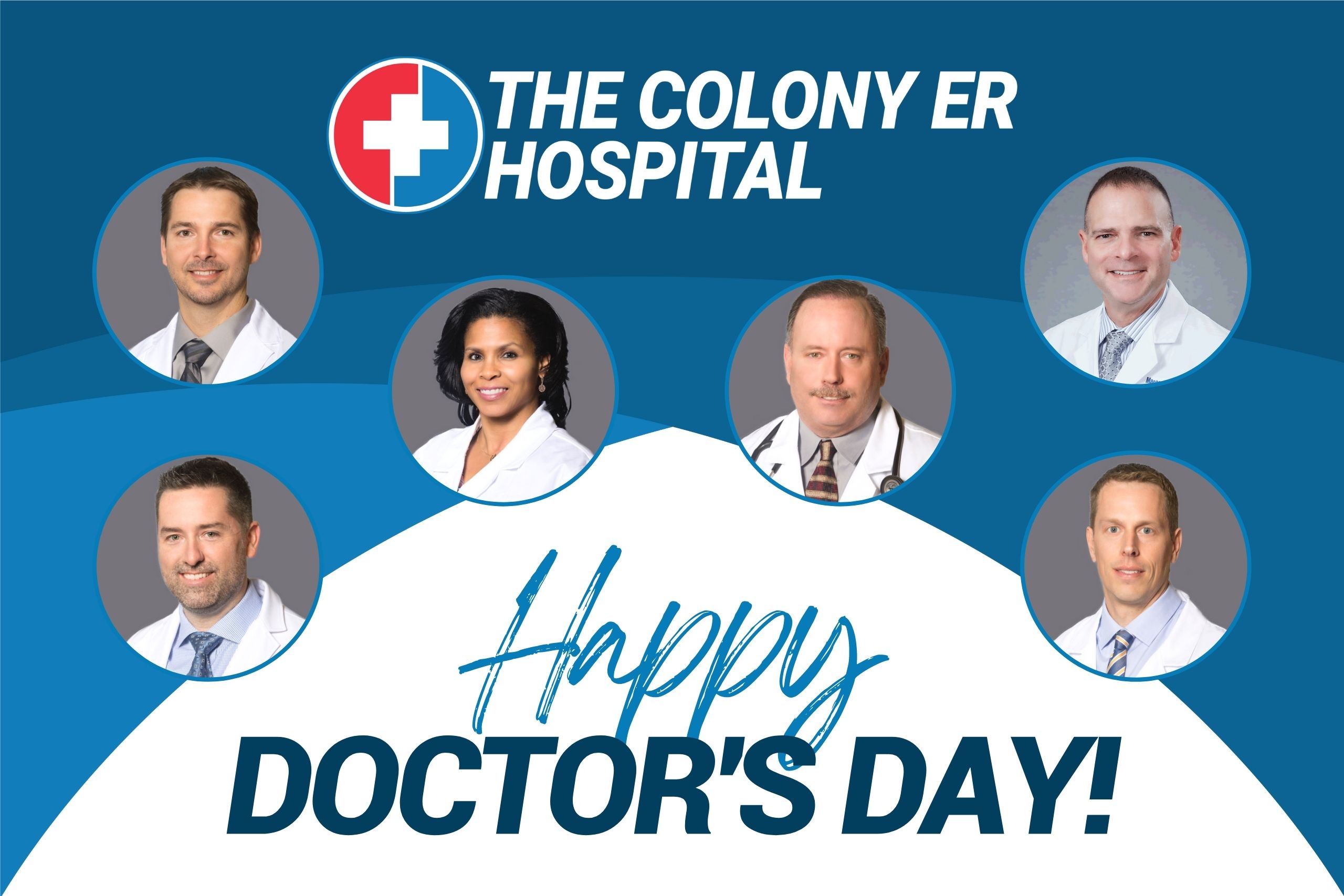 March 30 is National Doctors’ Day, a time to recognize the heroic measures doctors take to keep their communities safe and healthy. We would like to personally thank the remarkable physicians at The Colony ER Hospital!

Our incredible team of emergency physicians go above and beyond to put our patients first. We appreciate each of you and thank you from the bottom of our hearts for all the long hours you endure, the sacrifices you make, and the courageous work you do for our community. The Colony ER Hospital would not be where it is today without our amazing team of doctors!

“Only a life lived for others is a life worthwhile.” – Albert Einstein.

Get to Know Our Extraordinary Doctors

Dr. Laseter is a native of San Jose, California. He received his B.S. in Systems Physiology from San Jose State University and his M.D. in Osteopathic Medicine from Kirksville College of Osteopathic Medicine. He completed his residency at Carl R. Darnall Army Medical Center at Fort Hood, Texas. Board-certified with over 20 years of experience, he also served in the US Army for 7 years. He admirably spent 2005 with the 86th Combat Support Hospital in Baghdad, Iraq caring for our troops. While there, he earned a Meritorious Service Commendation for his work as well as being featured in an HBO documentary, “Baghdad ER”. After the Army, Dr. Laseter moved to Dallas, Texas in 2008 and has worked at several hospitals in the area.

Dr. Coppola has over 30 years of experience in military and emergency medicine. His hometown is in Howard Beach, New York, but he earned his Doctor of Osteopathy degree from Des Moines University. He completed his residency in Emergency Medicine at Carl R. Darnall Army Medical Center at Fort Hood, Texas. He is certified by the American Board of Emergency Medicine and is a Fellow of the American College of Emergency Physicians (ACEP). He has served in every type of emergency medicine practice model including military, civilian, academic, contract management, large group, urgent care, and now in the free-standing emergency medicine and micro-hospital arena.  He was a founding partner of Questcare Partners in Dallas, Texas, and has served as program director of three emergency medicine residencies throughout Texas.  Brigadier General (TX) Coppola is the Commander General of 2nd Brigade of the Texas State Guard. Among his achievements, he holds the Surgeon General’s “A” proficiency designation and is a member of the Order of Military Medical Merit.

Originally from Phoenix, Arizona, Dr. Bennetsen earned his undergraduate degree in Environmental Science from the University of Miami, after which he became a Doctor of Osteopathy from Midwestern University-AZCOM. He completed residency training in Family Medicine at the Mayo Clinic. Likewise, Dr. Bennetsen was board certified by the American Board of Family Medicine and has worked throughout DFW in various Emergency Departments ranging from Level I trauma centers to smaller community ERs. He has held leadership positions at Baylor Emergency Medical Centers, including Assistant Medical Director, Medical Director, Regional Medical Director, and a term as President of the Medical Executive Committee.

Dr. Wendie Williams has been practicing in the field for over 20 years. She moved to Dallas with her family in 2010 where she practiced at Parkland Memorial Hospital. Prior to that, she pursued her Bachelor of Science in Biology from University of Maryland College Park, Maryland where she is originally from, and then received her Doctor of Medicine degree from Howard University College of Medicine. After completing her residency, Dr. Williams moved to Baltimore, where she served as Associate Director of the Emergency Department.

Dr. William Peterson is a Board-Certified Emergency Physician with over 15 years of experience and he has been practicing Emergency Medicine in the state of Texas since 2006. He pursued his Medical Degree from The Medical College of Ohio and Residency in Emergency Medicine at University of Texas Southwestern. Dr. Peterson served as a US Naval Flight Surgeon for the VX-31 Dust Devils at The Naval Air Weapons Station in China Lake, California. During that time, he held a Medical Director position for Search and Rescue where he twice received the Navy and Marine Corps Commendation Medal and was named NAVAIR TYCOM Flight Surgeon of the Year in 2004.

Dr. Robert Holland earned his B.S. in Biomedical Science from Texas A&M and an M.D. from Baylor College of Medicine. He completed his residency in Emergency Medicine at the University of Texas Houston. With his leadership skills, Dr. Holland focuses on serving his community by providing an excellent patient experience. He received recognition for his efforts from D Magazine, named “Best Doctors in Collin County” in 2015 and 2017, and “Best Doctors in Emergency Medicine” in 2017. Dr. Holland is an entrepreneur and investor, and he is passionate about service-oriented activities. He is also the owner of Little Medical School of North Texas.

We tip our hat to these six accomplished doctors who help make The Colony ER Hospital the highly regarded medical facility it is. In honor of #DoctorsDay, be sure to thank a doctor in your life who has made an impact on you!